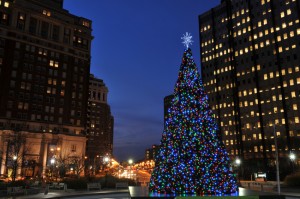 Seasonal celebrations make December in Philadelphia the most wonderful time of the year. With family-friendly festivities and more twinkling lights than you can shake a stick at, Philly’s iconic attractions and new winter time events are getting everyone into the spirit of the season.

If ice skating, waterfront shopping and mind-blowing light shows sound exciting, then make sure to take note of the following holiday events – many of which are free!

Here’s a round-up of some of the most popular holiday events that are sure to warm your heart and dazzle the kids during this chilly season.

Macy’s Christmas Light Show – a time-honored tradition for nearly 60 years, this light show spectacular at Macy’s in Center City delights with more than 100,000 LED lights, and a Dickens Village replete with animated figures that bring “A Christmas Carol” to life. Runs from November 29-December 31, 2014

Franklin Square Electrical Spectacle Holiday Light Show – Inspired by the brilliant mind of Ben Franklin, this free show illuminates the square with more than 50,000 lights of varying colors, shapes and designs. Best of all – it’s free! The light show, which runs through December 31, is just one of a series of events in the Franklin Square Holiday Festival, which also includes a holiday market and popular winter beer garden.

RiverRink Winterfest – Penn’s Landing is the site of this revamped holiday fest, which features ice skating in a regulation-sized rink, gourmet food and drink, tons of shopping and family-fun on the Delaware waterfront. Watch thousands of lights – perfectly synced to music – dance across the park, and warm-up your mitts in a heated-chalet tent with indoor fireplace.

Shopping at Philly’s Christmas Village –It doesn’t get more charming than this European-inspired village that attracts thousands of holiday-goers through December 28. Pick up high-end arts and crafts, traditional Christmas ornaments from Germany and other seasonal gifts. While you’re shopping, be sure to try some hot spiced mulled wine, bratwursts and delicious gingerbread.

Reading Terminal Market Holiday Railroad – This foodie paradise in Philadelphia ramps up for the holiday season with a 500 square-foot railroad in its own piano court. Kids of all ages can marvel at 14 train lines making their way through a miniature version of Center City and the countryside. November 28 – December 31

Rittenhouse Square Tree Lightning – Each year on December 1, thousands of Philadelphia residents and visitors head to this historic landmark to witness the ceremonial lighting of a 30-foot Christmas tree – one of the city’s largest. During the holiday season, the shops along Rittenhouse Row are aglow with thousands of lights, adding to the festive feeling.

A smart alternative to Philadelphia homes for sale

Darley Green, which features move in ready homes near Philadelphia, is less than half an hour from the seasonal festivities of Philly. This innovative master-planned community is one of the most sought after destinations for families, retirees and young couples who want to be close to the night life, shopping, and recreation of the big city, but want more bang for their buck and an easy commute.

Luxuriously-appointed three-story townhomes and two-story condos are attractively priced for new homebuyers who want a central location just five minutes from Wilmington, and in a family-friendly neighborhood. If you’ve been disheartened by Philadelphia homes for sale and would like to learn more about Darley Green, please give us a call at 302-472-7213 to schedule a home tour today!